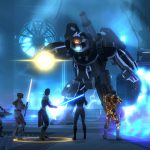 A key feature of any MMO is group content, and in SWTOR that’s “Operations”. These are that 8 or 16 player, multiple boss raids that require your typical balanced team, teamwork, strategy and time. AIE in SWTOR runs Operations often in our Tuesday night Mandatory Fun Night open guild events and in one-off pickup groups, but all the serious Operations progression happens in our 4 standing Ops teams. If you are interested in joining, all the teams need subs from time to time. Check out the #swtor channel in guild Discord and drop a note to the team leads! Here’s a quick rundown of background and status update on our awesome teams:

Deathstar Troopers
Newest of the AIE Ops teams, this team was created in 2018 by Marcus in response to growing demand for more capacity. As with any new team the first challenge was to fill all the roles and balance the team, which they got done pretty quickly and started blasting through content. Towards the end of 2018 they decided to progress in difficulty a rank and are now working through Veteran Mode in various Operations. They started down the path with Veteran Mode Dread Fortress and have focused on that on and off for the past few months.

As of a week ago, the team finally killed the last boss of the Operation and has now officially cleared Veteran Dread Fortress!! Dread Master Brontes, Corruptor Zero and the rest of the bosses have now surrendered and the team is setting their sights on Veteran Scum and Villainy. Congrats to the team, including Albus, Bolto (Albus’ son), Dr. Swtor (co-host of Ootinicast), Racevan, Ted (of the State of the Old Republic podcast) with ongoing help from Lorhin and Kogass (both popular SWTOR streamers). This crew is led by Marcus, who is also one of our AIE Community Officers and one of the hosts of the Working Class Nerds podcast. They run twice a week on Thursday and Sunday nights.

Sith of Unlimited Power (SUP)
Founded by Jana, SUP is a long running casual team that welcomes new players and players new to Operations. The name continued an old SWTOR tradition of picking the acronym first and working out what it means second (as you’ll see for the next two older teams as well). In April, Albus and Maellung stepped up to co-lead the team, with Albus generally handling the ops run tactics and Maellung handling the team coordination, filling in of roles, etc.

With the leadership update in April, the entire team decided to switch up characters, roles, etc. to give everyone some fresh challenges. With that, they are now doing all Story Mode Operations weekly and building up all the new muscle memory and strategy in their new positions. Current members include Maellung, AlbusPuer, Azzoros, Stryker, Helare, Kione, Looci, and DoubleDC. Give them a shout on Wednesday nights if you might want to help out or fill in any roles missing for a night.

Soldiers of Light (SOL)
SOL was created years ago due to the desire to have a Republic Side ops team. AIE in SWTOR continues to have a strong guild presence on both the Republic and Imperial sides and we all have characters on both, so it certainly made sense to have a team there as well. One of our Operations Masters in guild leadership, Dent, runs the team and the team roster includes Zen, Kitty, Maellung, Racevan, Randy, DPRoberts, and Peters with recent additional help from Kione, Corely Spicolee, and Dravix.

This Republic squad is currently working on the Veteran Mode Mutated Geonosian Queen fight. This is the newest Operation Boss in the game, lair style, with just a single boss in a small Operation. This fight is also required for a weekly mission that awards currency for the best-in-slot 258 weapons and off-hands. Check in with SOL and Dent on Monday nights on the Republic side if you’d like to offer your backfill services.

Lords of Light (LOL)
Finally, LOL is the oldest of all the current SWTOR Operations teams. Founded not long after launch, many of the players have changed but the game remains the same. For LOL that game is have fun and kill all the things… including your friends. Props are given for killing as many of your own team members as possible in the trash leadups to any boss through creative use of game mechanics, traps, etc.

Corley has recently had the team leadership thrust upon him and the rest of the team includes Thaan, Stavus, Smoke, Sten, Looci, Dent, Sema and Max (I think those last two do a podcast too). The team is happy to have Sten recently returning since he is now filling the Canadian spot on the team, a virtual requirement since founding. This team runs on Thursday nights and alternates between pretty much any Operation for Conquest, progression or fun. Veteran Queen is going to start in earnest next week for this team as well to get those 258 guns and glow sticks.

Come Join!
Thanks to all the SWTOR Operations teams for keeping up the good fight. For more information or to check in with any of the teams on available spots, more status updates, etc. be sure to join the guild Discord and say hi in the #swtor channel.