In the Meet an AIE Officer Series, we will corner an AIE officer with a few questions and see what answers come up with.  In this edition, we will talk with Syreyne! 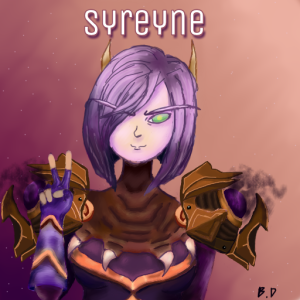 Who are you and what do you do for AIE?

I am Syreyne. I am one of the game directors for WoW Horde and the game director for WoW Alliance. I am also the herder of cats. And I’m the owner of SAD, Sy’s Aquatic Distribution, a company that specializes in safety storing and distributing Left Sharks.

What got you into AIE?

I actually used to play only alliance on Earthen Ring. Every one on the blue side complained all the time about this horde guild (Alea Iacta Est) who razzed us and made life hard. So one day I made a blood elf rogue named Syreyne (because Siren was taken) and asked to join. I even put on my app that I was an officer in my alliance guild and that I’m only joining to spy. They still let me in.

When did you feel that AIE was something special?

I never really played Horde much since all my friends were in our alliance guild. But one day, everyone was talking about this yearly thing AIE did. So I was curious and tagged along. I was my first ever Remembrance Day. Something I will never forget. That’s when I knew AIE was something special and not just another guild in WoW. I was amazed at the support and the number of people that respected that event so reverently. After that, I was hooked.

What got you into being an officer with AIE?

I can’t remember what specifically it was, but I’m pretty sure it had to do with the Craft Faire. My first time doing it, I was just a helper, pretending to die, to draw people to first aid. The next time, I ran first aid. The third time, the Craft Faire director stepped down and somehow (not really sure how) I was put in charge. 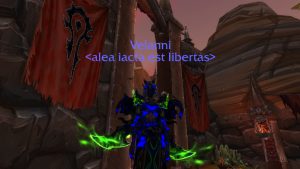 What is the craziest thing that you have seen AIE pull off?

Let’s see. The Black Friday COOP event was epic. All the weddings in Stormwind Chapel, including my own.

Can you tell us a bit more about your wedding at Stormwind Chapel?  It being in hostile territory for the Horde and all..

So, we had bridesmaids and groomsmen and did the processional, coming up from the basement. The wedding was the weekend before my actual wedding. Spork and I got married in-game on August 1st. Our wedding was the COOP event for Summer of Love that year, so you know we had a blast keeping the Alliance from entering the doorway. Ralff did the ceremony. sniffle A week later, on August 8th, we got married in real life. We even had a few AIE members attend the live wedding, and some were in it! After the pastor announced us as man and wife, we all shouted For The Horde! Then some people freaked out because I jumped in the lake in my wedding dress…on purpose. smiles

For someone new to AIE, what advice would you give them?

I would say, the biggest thing I can tell you is to attend events that we put on, speak up in GreenWall (WoW), ask for help, talk in Discord. We are a very family friendly community, but there are a lot of us. If you put a little effort into getting to know some community members, you’ll be surprised by how many more will end up as a friend. You may even find a friend to play with in one of our other game divisions. One of the benefits we have is how large our community is and how diverse the members are.

If someone is shy and doesn’t know what to say, what would you suggest they say to introduce themselves to the community? 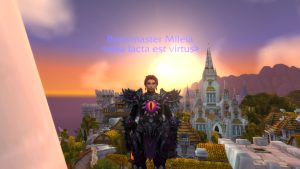 Start out small. You don’t need to tell everyone your life story. Just be yourself. Hop into an ongoing chat discussion. Or start a new one. Something easy. Say hey, I’m new to AIE, anything going on? Or like wiggly or crispy bacon? I love crispy! Or ask what’s your favorite Marvel movie? Mine is <insert>... Or you can be really brave and ask which is better, Star Wars or Star Trek?

Thank you for your time, Syreyne.