AIE in Lord of the Rings Online

Home / AIE in Lord of the Rings Online

AIE in Lord of the Rings Online

Update on our LotRO division courtesy of officer Maellung

One does not simply join AIE in LotRO. Oh wait… yes one does!

Right now we are focused on our weekly Mandatory Fun Night named Saturday Night LotRO (SNL). It runs from 8:30pm – 10:30pm eastern on the Landroval server every Saturday. We are typically Free-to-Play friendly on those nights and run anything from festival events, to instances (mini dungeons), to helping people run quests. We even have plans in the works to do some Player vs Monster Player (PvMP, a kind of PvP) where we will show everyone how to run as a monster player (Orc, spider, warg, etc.) and have some fun with it.

If you have any questions or have any ideas on something you would like to run feel free to ask anyone of us in the #lotro channel on Discord!

Lord of the Rings Online has been around since 2007. Back in 2016 Standing Stone Games acquired the rights from Turbine and Warner Bros along with Dungeons & Dragons Online. Standing Stone Games has continued to try to put out two major updates a year. With the most recent major update, “The Vales of Anduin” (home of the Beornings) is now available.

LotRO is, of course, based on the books by J.R.R. Tolkien. A really fun part of LotRO is that the in-game storyline and your epic quests tell a story that runs parallel and is interwoven with what we know and love in the books. What you do during the quests directly helps the fellowship and all the familiar characters. The devs have also tried hard to keep the feel in game that Tolkien had in his writings. There are also some awesome “easter egg” side quests to honor J.R.R. Tolkien.

There are 3 account types: Free-to-Play, Premium and VIP. VIP is a subscriber level with all the benefits, Premium is achieved by spending some amount of money on the game. One nice aspect of Free-to-Play tier is that it *is* possible to get all the content in the game through the in game LotRO store via store credit points you acquire through gameplay. It is a grind to do it, but you can be 100% Free-to-Play and still play 100% of the content. 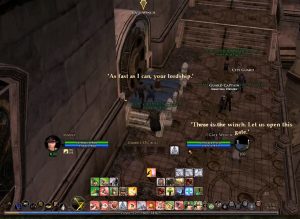 With the relatively recent addition of the Legendary Servers, Anor and Ithil, new life has been injected into the game for long time players. These servers start the original story over and every few months they open a new addition. Lately they have added Mirkwood with a level cap of 65. The XP rate that you earn is nerfed 40% so Legendary players are incented to do all the quests and experience all the original content. Some of the old-timers haven’t done them in years, which make it all feel fresh. The legendary servers are only open to those that are VIP. 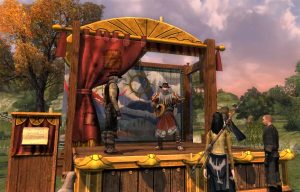 What else can you do in LotRO? Lots! There are raids for 12 or 24 people. There is a music system that allows you to either freehand play instruments or use ABC files to play a wide variety of songs either solo or in a band. Events, mounted battles, monster play, mount and pet collecting and more round out the possibilities. Come join!