Our journey continues through uncharted space. We have encountered a unique condition of the continuum where it appears the human concept of fun is mandatory. We are pressing on, to boldly go where no guild has gone before. 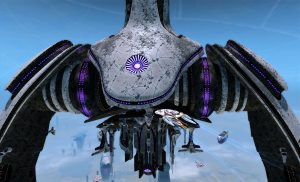 As we’ve done in many other AIE divisions, our crew in STO has scheduled a recurring, weekly Mandatory Fun Night. Most Sunday nights at 7:30 PM Central we get the guild fleet together to run new content and any in-game events. We’ll even run episodes on occasion if a new player needs help leveling, so be sure to check in no matter the level of your captain. Like all good engineers, we are also constantly working on gear and ships, and sharing best practices to getting a little more out of our warp cores, shields, phasers, etc.

The guild fleet also maintains a Fleet “Spire”. Equivalent to guild HQ, housing or ships in other games, the Spire has bases and facilities that guild members can visit and hang out in along with a system of guild services that are available. Last week we completed construction on our Tier 2 Spire in the Dyson’s Sphere. Our goal is to complete the Spire to Tier 3. Ask in Discord for details on how to visit and what services you can make use of. 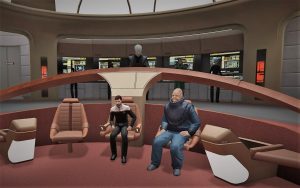 Along with the release of the new reputation, a new season of episodes was released called Rise of Discovery. So far two episodes have been made available and focus around what happens prior to when Lorca takes command of the Discovery. For these episodes the dev team was able to get Jason Isaacs and Rekha Sharma to reprise their roles of Lorca and Landry. Aren’t holodecks fantastic?

Along with this update, Tier 6 ships are now able to be used at any level and are no longer locked to only endgame players. This allows them to be used and scale as you level so their slots and stats match what ships of your character’s level need to be at the time, all the way to endgame. STO has also introduced a system where, over time, you can earn a free T6 ship for your account. It’s a long journey and requires playing the new content to earn the tokens, but worth it given the new utility of T6 ships at all levels.

STO continues to be a great MMO with a strong free-to-play model. Our AIE fleet is modest but active with weekly events and a handful of vets to help. Jump in the #STO channel in Discord to ask any questions and find out the best way to ‘engage’. 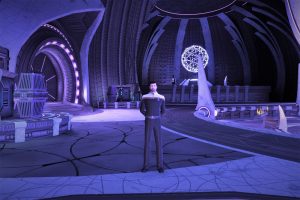