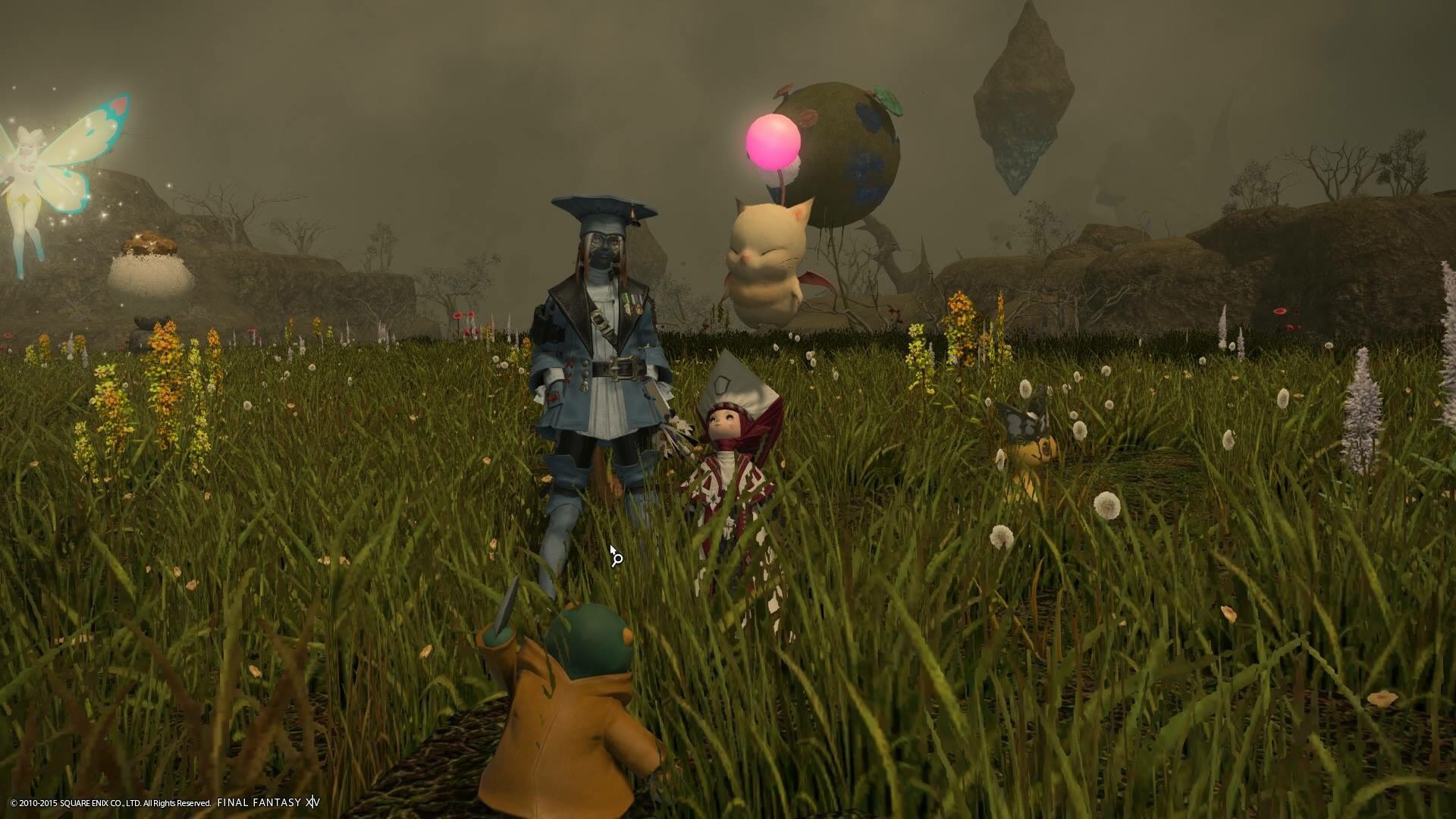 Greetings AIE! Jehdai here with an announcement for our guild member recognition program. AIE would like to congratulate our Guildies of the Month for July: Khatlyn and Tanaria from Final Fantasy XIV. Khatlyn and Tanaria are married in real life, and in game they are both super helpful people. To help everyone else get know our awesome guildmates better I did a short interview with them:

Jehdai: When did you join AIE?
Khatlyn: November 2011
Tanaria: This would have been back in November of 2009.  Or at least that’s when the Forums say I joined.  My memory is fuzzy.  I had a bunch of toons on Doomhammer and really got into the podcast, so worked on transferring them over to horde side on Earthen Ring.  It was so great to have an active, vibrant guild to be part of again.  After many years of WoW, Blizzard did some things, which caused some stuff and Khat and I quit WoW and came to play in FFXIV where, happily, there was a familiar Free Company called AIE!

Jehdai: What is your favorite part of AIE FFXIV?
Khatlyn: The friendly community atmosphere that we got used to in AIE WoW is here as well, but being smaller, feels even more like a tight knit family. The ability to be multiple classes and level sync for dungeons, you know that you can ask in FC chat for help or company to do something, and someone is bound to pipe up with their willingness.
Tanaria: That would have to be the people.  There is a general AIE-ness to the people that always makes it feel good to long on and play.

Jehdai: The Tonberry King is the best boss ever, don’t you agree?
Khatlyn: Actually I can’t… as much fun as he is, King Moogle is my favorite. Even after all of Moogle quests with the expansion, I still love Moogles and just find that boss so much fun. You can’t possibly not smile when you have dancing Moogles with the Moogle music around.
Tanaria: I can agree he’s pretty fun.  Having run him during leveling and during roulettes, I will say he’s gotten terribly easy.  Still, fighting a green blob wearing a Santa robe and a crown?  How could you not say he’s awesome?

Jehdai: You both are described as super helpful, what makes you two so awesome?
Khatlyn: Well, Tanaria is super helpful because he is the best husband and rarely says no to me 😉 Actually, we’re helpful because we have been met with the same from the FC. When we were new to the game, if we had questions or needed help, someone always was there and still are. We just try to pass that along, as we know how much we appreciated it & still do.
Tanaria: That would be Khat.  She’s so awesome that it makes up for my non-awesomeness.  The other thing is alt-aholicness.  Having at least one of every role including crafters and gatherers, it’s easy to fill in when someone needs something or if someone needs something made.

Jehdai: FFXIV forces you to make a last name for your characters, what was the inspiration for your last names?
Khatlyn: My main in WoW when I joined AIE was Khaebil (my forum name), but when I came to FFXIV, I had been playing Khatlyn so went with Khatlyn for my first name and used Khaebil as inspiration for the last name. And since she is a lallafel which are either dunesfolk or plainsfolk, I combined it with that to get Khaefolk. I also thought ‘folk’ was fitting considering the toon basically has a split personality with being all the different classes.
Tanaria: The names and last names for all my characters actually pre-date FFXIV and WoW.  I was actually pretty disappointed that WoW didn’t allow last names.  Back in Everquest (the first one) my very first toon was “Tanaria”.  Characters didn’t start with a last name, you had to level up to be able to choose one.  She was a gnome enchanter.  When I finally got to the level where I could pick my last name, I was decked out in an awesome yellow robe.  I tried to give my self the name “Tanaria d’Banan” to celebrate the awesomeness of my banana yellow robe, but the game wouldn’t let me.  So we petitioned a GM to help.  After a bit, I had my name.  Every other caster type character I’ve had in any game has been “Tanaria” or very close.  She has been in EQ2, WoW, Camelot and FFXIV. The same thing happened with most of my other characters from EQ as well.  “Tannidru Switftypaws” was my druid in EQ and my druid in WoW sans the last name.  “Bellow deBellet” was my warrior (gnome or goblin of course).  My bard’s name in EQ never made it to any other game though.  Her name was pretty silly.  “Bananarific Fruitastic”.  BRIGHT yellow armor.  My ranger “Lanier” has persisted through most of the MMORPGs as my ONLY male toon.  He was in EQ and WoW.

Jehdai: and the all important food question: Strawberry shake or Chocolate Shake?
Khatlyn: Chocolate shake with a strawberry on top please. 🙂
Tanaria: It’s hard to justify the sugar content in a shake, but I was particularly fond of Strawberry when I could have them.

AIE’s Guildie of the Month program is our way to acknowledge outstanding members in our community. If you know someone that deserves to be recognized, please send an email to us at gotm@aie-guild.org with the name of the person you are nominating in the subject line. Nominations for July’s GotM will be accepted until July 12th, 2015. This is a community wide program. Nominations will be accepted for members from any game division.