Syreyne: Guildie of the Month

Home / Syreyne: Guildie of the Month 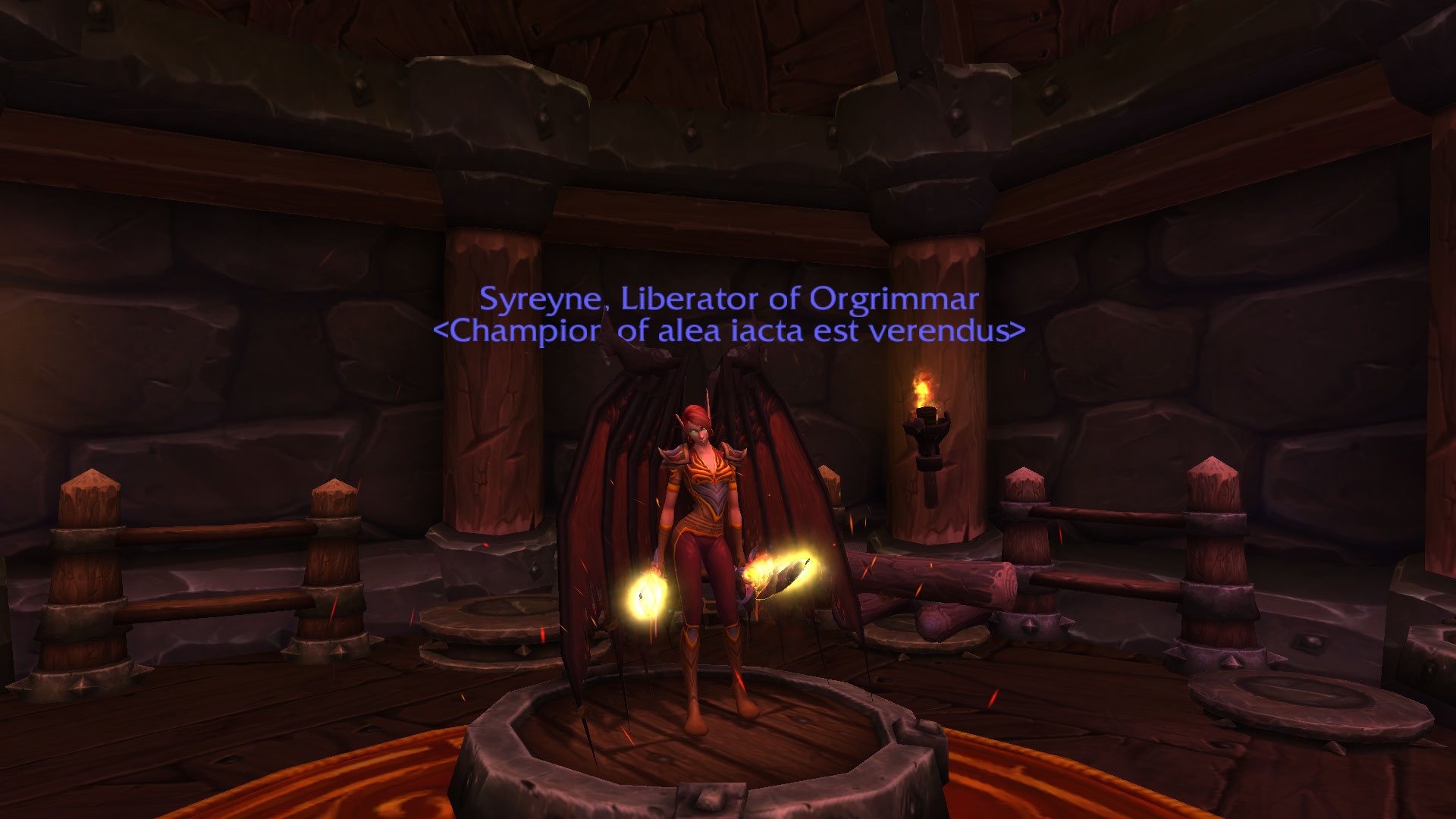 Syreyne: Guildie of the Month

Greetings AIE! Jehdai here with an announcement for June’s GoTM. This month is another departure from procedure. Since we just had one of our semi-annual craft faires, we thought it would be appropriate to honor our guild’s craft faire coordinator: Syreyne. When I told Sy about this, she embodied the true spirit of AIE by trying to turn it down. She said that she doesn’t do this alone, and that there are lots of people that make the craft faire amazing. I agreed with her, but told her that she had no choice because there was no backup plan. I did agree to honor all of the craft faire volunteers.

So there might be a few of you that are scratching your head saying, “Who is this Syreyne person?” I conducted a brief interview with her to find out:

Syreyne: Syreyne joined AIE on July 2. 2010.  I originally created her to spy on the horde for all my Alliance friends and to gank said friends in BGs.  But it was boring with no guild.  So I kept hearing about this AIE guild and how horrible they are, and how they’re jerkfaces, and how they keep griefing us in Southshore.  So I decided to join up and see what the deal was.  What I found instead was a pretty awesome group of people.  So much so, that in February 2011, I started paying to faction change my toons over from Alliance.

Jehdai: When did you drink the Kool-Aid and become an officer?

Syreyne: That is a good question….November of 2011.  Wow, that seems like a long time ago….It happened right when the big co-guild split came.  I missed out on the fun and chaos of making up new guild names.

Jehdai: What is your favorite AIE moment?

Syreyne: There are moments that stick out at you, no matter where you go.  Not one of them is overly more important than another.  It’s hard to tell what is the most favorite.  Here are a few of them though:  meeting my fiancé in AIE vent, my first ever Memorial Day event, making a bestie with Ellynn, my friends in DoA, that epic Stormwind wedding…..I could go on and on…

Jehdai: How many people have you helped level up professions since you have been the Craft Faire Coordinator?

Syreyne: Hundreds?  Honestly, I have no idea.  Sometimes there’s tons of people, and sometimes there isn’t.  We didn’t start doing sign ups or registrations until like last year.  There’s really no way to tell.  But a lot.  I know it’s a lot.  And many of them come back the following year and volunteer, so that’s really cool too.  Also, Craft Faire Coordinator is much too formal.  I prefer Cat Herder.  Syreyne, the Herder of Cats.  That’s my official title.

Little known fact, my first ever Craft Faire, I was a gangly little 50 something Belf rogue in the big shark tank of AIE.  I had no idea what to do.  So I volunteered.  I helped out in first aid and it was magical.  There’s nothing like wearing a bandage shirt, laying on the ground pretending to be injured and hollering out for some brave souls to heal my wounds.  I spent 3 hours in SMC using overly-dramatic comedic acting to get people to first aid.  It was a blast.

By my third or fourth Craft Faire, I somehow found myself its fearless leader, and honestly, I still have no idea how that happened.

Jehdai: What other AIE games do you play?

Syreyne: I’ve tried EVE.  It’s not my thing.  I did however have an active account when that cool memorial thing was made, so Syreyne is on it.  I tried LotR but it felt too much like WoW, so I didn’t play it long.  Right now I’ve been playing a lot of SWTOR.  I love the story arcs and the cinematic conversations.  Plus, the bonus going on is awesome.  I got my bounty hunter to 55, but I can’t decide which toon to play next.  Why, you ask?  Because I have a severe case of altoholism.  I have two WoW accounts, 12 horde toons above 90, and 8 toons in SWTOR.  I need help.

Syreyne: I’m going to say Sea Salt, just because I like water.  I wanted to be a marine biologist at one point.  I also almost got in the Navy, but I failed the physical because of a cheerleading injury.  Seriously.  But either way, I like salt.  Lots and lots of salt.  Salt is delicious.  Salt is one of my food groups.  I blame it on my mother.  I grew up with her putting salt in her orange juice during breakfast.

AIE’s Guildie of the Month program is our way to acknowledge outstanding members in our community. If you know someone that deserves to be recognized, please send an email to us at gotm@aie-guild.org with the name of the person you are nominating in the subject line. Nominations for July’s GotM will be accepted until June 14th, 2015. This is a community wide program. Nominations will be accepted for members from any game division.