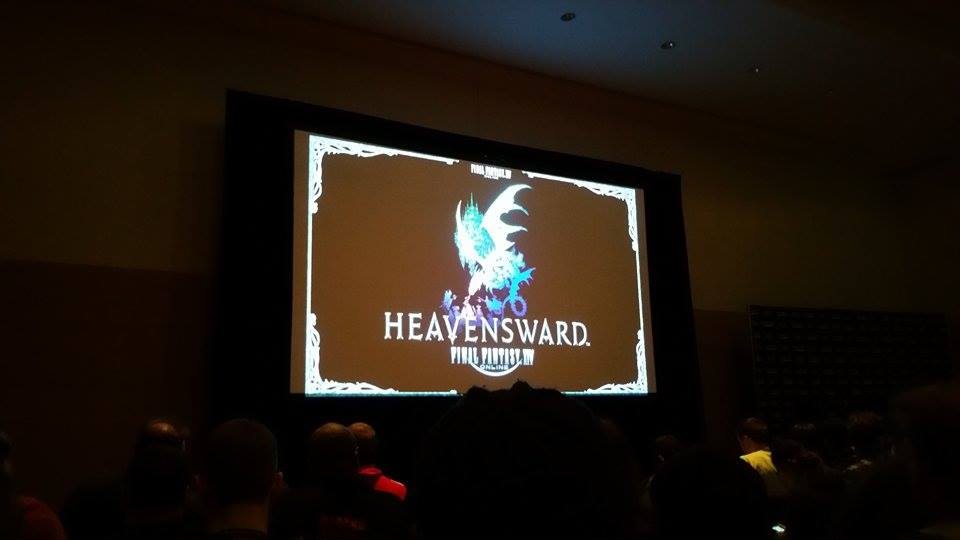 Greetings AIE guildmates! Jack Rider here and I come to you having just returned from the land of merriment and excitement, PAX East 2015, and I’m here to drop some knowledge about Final Fantasy XIV’s newest expansion, Heavensward.

PAX East itself is gamer-focused convention, showcasing games that many developers bring in order to showoff directly to gamers as well as hardware manufacturers advertising their latest and greatest products.

The first place my partner-in-crime Malice Delacour and I went at the start of the show was to the Square Enix booth, to attempt the FFXIV “Shiva Battle Challenge”. Square Enix (SE) has a tradition of creating 8-man encounters for various conventions, and giving away FFXIV related loot to those who  have the guts to complete them. Being the FFXIV sucker that I am, Malice and I decided we had to have one of these nifty “I Beat Shiva” shirts.

We got in line after a bit of small talk with the SE rep. While we were waiting, we met other FFXIV players from different servers, states, and even countries, all waiting to complete the same challenge. By the time we were at the front of the line, we had formed our own little PUG, and were ready for whatever SE decided to throw at us. Before we knew it we were adjusting toolbars and readying for our combat. As luck would have it, I was the one who chose the PC that was considered the “party leader”. With a bit of a wobble in my mouse hand, I queued us up for the challenge, and…we basically steamrolled it! Our ragtag group was probably in the running for the record, had such records been a thing.

Our impromptu group paused by the Heavensward banner to get our pictures taken together, and not a moment later, did Producer/Director Naoki Yoshida  (affectionately known as Yoshi-P) arrived and started mingling with the fans. We even managed to get pictures with him.

The following day was the FFXIV Heavensward panel going over some of the info on the new expansion. The queue for the panel ended-up capping before the panel started, and the throng of gamers waiting in line helped keep the excitement at an all time high as we were finally shuffled into the theater. We were presented with some collectible postcards, and then the panel started with a recap of mostly already released info: flying mounts, raid and dungeon content, and three new jobs. Then Yoshi-P gave us a special behind-the-scenes view of how those new playable jobs are added to the game. A few beautiful slides of concept artwork were shown for canceled designs, and even a hint towards a possible Samurai job in the future. The art was interesting, and it was a bit of a letdown that so much of what we were shown wasn’t in-game, but Yoshida assured us there were other things that haven’t been cut from the game which would pique our interest. Since the level cap is increasing to 60, naturally jobs are getting some nice looking new duds. “Nice” is a definite understatement. When I mean all jobs, I mean all jobs, even the crafting and gathering jobs! If you’d like to see them for yourself you can go here.

Following that was the announcement that a new benchmark tool for the game was going to be released which, like the previous one, would allow players to fool around with the character creator and see some of the options for the new playable race, the Au’ ra,  as well as some of the allure or the new setting.

We were then treated to unfinished footage of the benchmark tool, including an appearance by one of the new Primal bosses, a gigantic white flying thing called Bismark, which decided to swoop down and end the demo with a up close view of its gaping black maw.

Bayohne looked around the panel room and remarked that this was everything, and I know of at least one chap that got up and left the panel. The rest of us however, weren’t so easily taken, and we were rewarded with a video tour of the new expansion, the new zones, the city of Ishgard, as well as teased some new locations like The Floating City of FF series lore, and Alexander the new endgame 8-man raid content. It’s quite a stellar video, and it shows off some of the new soundtrack as well, but don’t take my word for it, give it a gander.

Then, came the big announcement, the release date, June 23 2015, with early-access starting on the 19th.

Afterwards was a short autograph session where Yoshida signed Malice’s Collector’s copy of the game. It was a fun experience, and the overall love for the game from fans was very noticeable.  If you’d like to check out the whole panel in its entirety on Twitch.tv

Here’s to seeing you in the world of Eorzea in June! 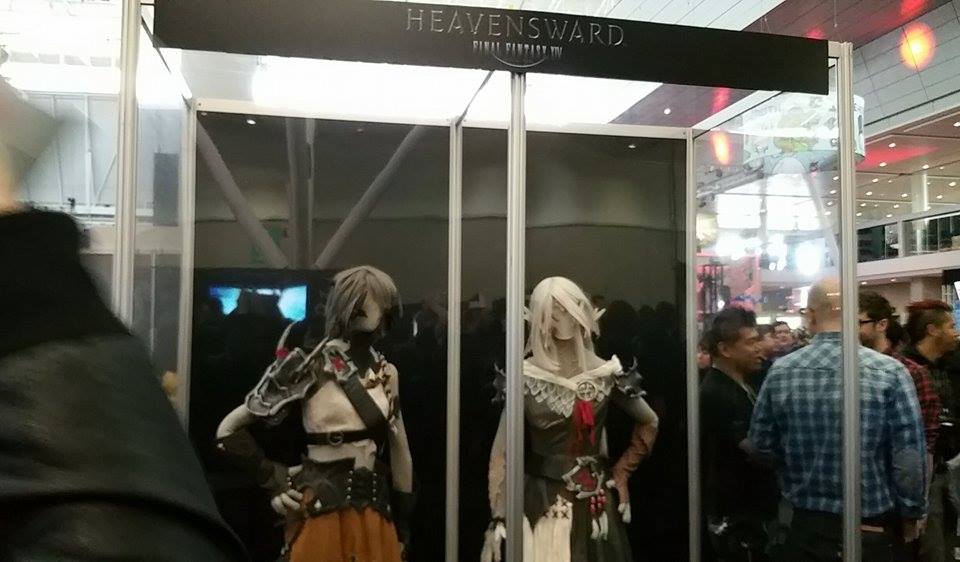 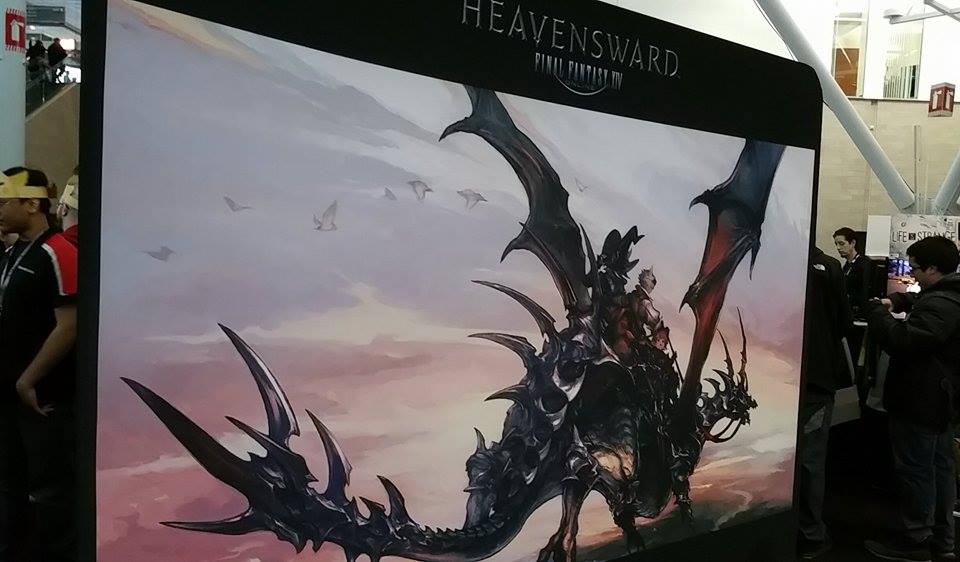 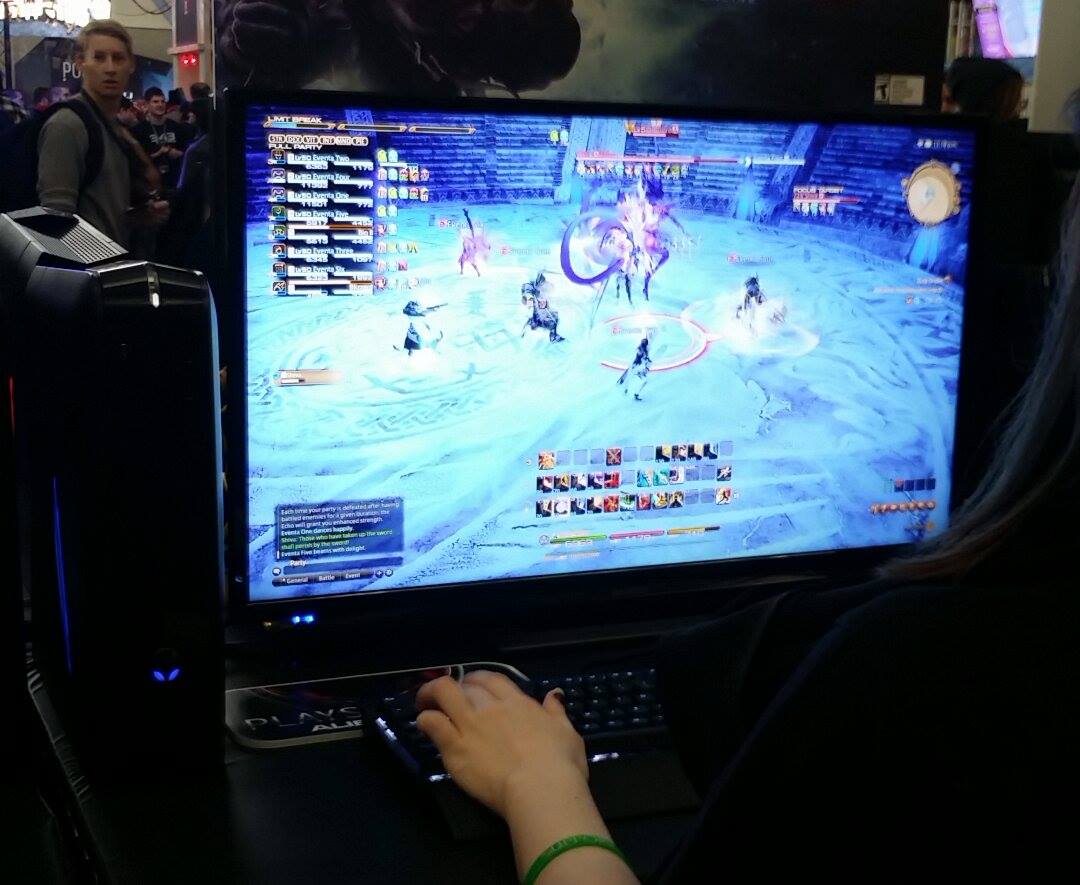 Over the shoulder of a congoer playing. 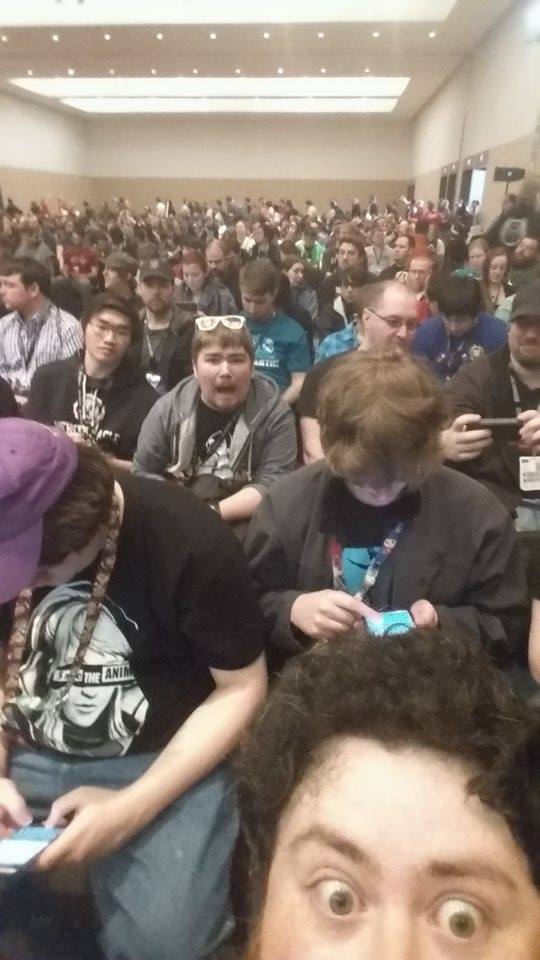 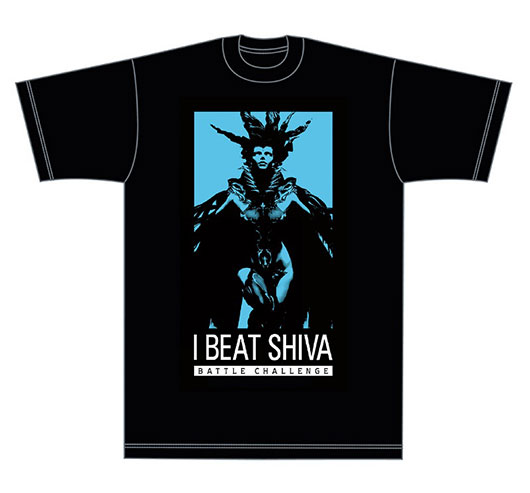 Shiva t-shirt, the reward for beating the boss, Shiva at PAX East 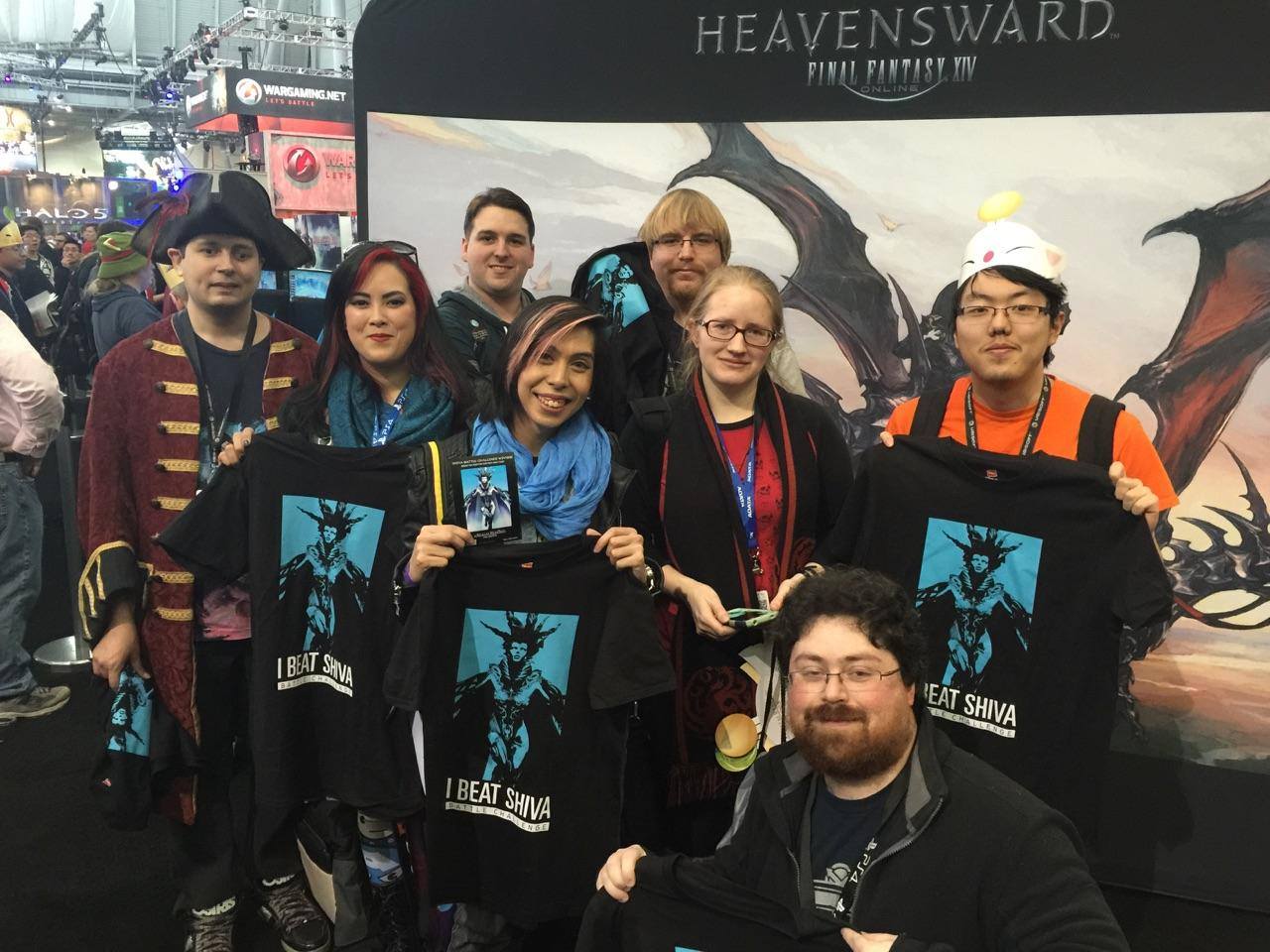 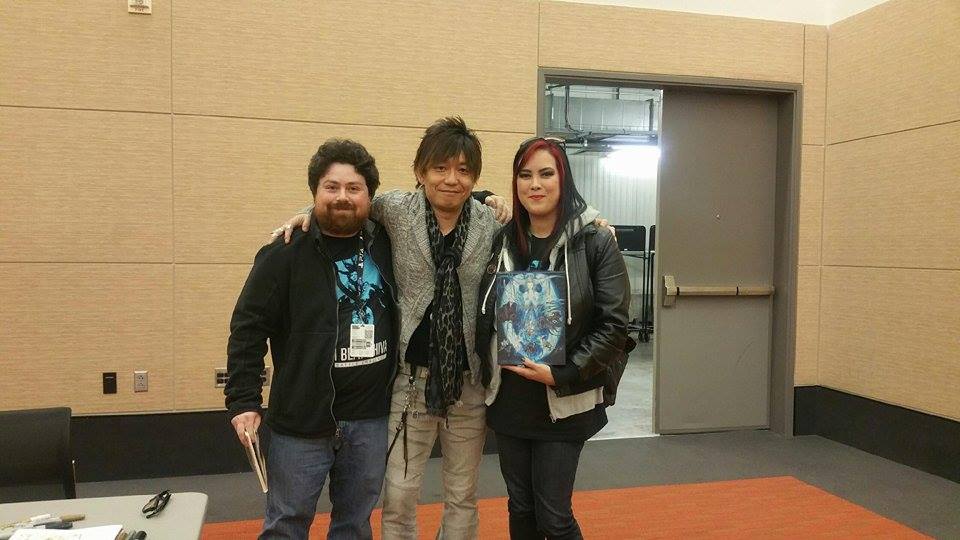 Malice and Jack with Yoshi-P, the FFXIV Producer 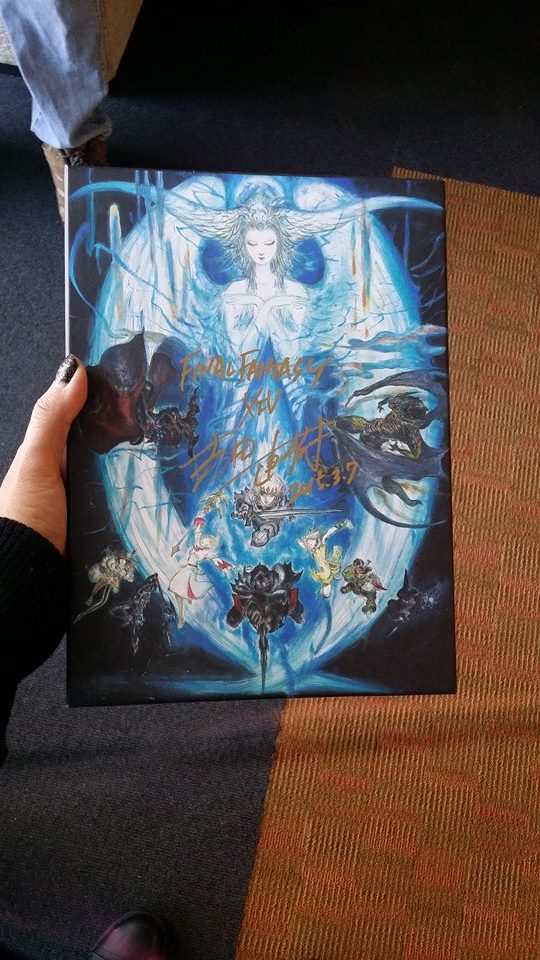