The devs gathered around Frelorn’s computer to hold the curtain aside for a few minutes on what will drop in 14.2 (next week!). Hint: play Sam as he tries to help Frodo through the Dead Marshes and prevent Gollum from killing you and Frodo in the process.

The devtalk began with an overview of the new mount gallery. No more mounting up to see which one the icon refers to, an avatar of the mount will appear on your screen for each mount you own. Bonus: if you own all of a certain class or group, you may get achievement deeds or other bonuses, i.e. all the Farmer’s Faire mounts, etc.

Next, we moved onto the Pet Gallery – yes there are now pets! Right now, there are only swans and caveclaws, but there are lots of options going forward. Not sure if the Hobbit pet was a rumor started by Mordor, but I’m sure the orcs (Creeps) would love to get one.

The devs are introducing a new achievement system that isn’t tied to deeds. The deed system needs to be reworked they said and the new system will be faster, better, easier, etc. Can’t wait to see that!

Now, the big news! The Dead Marshes is a new area near West Gondor that will be available to all level 100 players. The goal is to have the players check in with Frodo and Sam, even though they are on a very secret mission. This ‘end-game’ event will bring you through the Dead Marshes and into the pools and ghostly vapors of former warriors long past. This is also the beginning of the Dawnless Days as the clouds creep slowly toward Minas Tirith. The Dead Marshes are dark and dreary, and Gollum will lead you through the traps and pitfalls, and the risk of the mission failing will rest entirely on you. 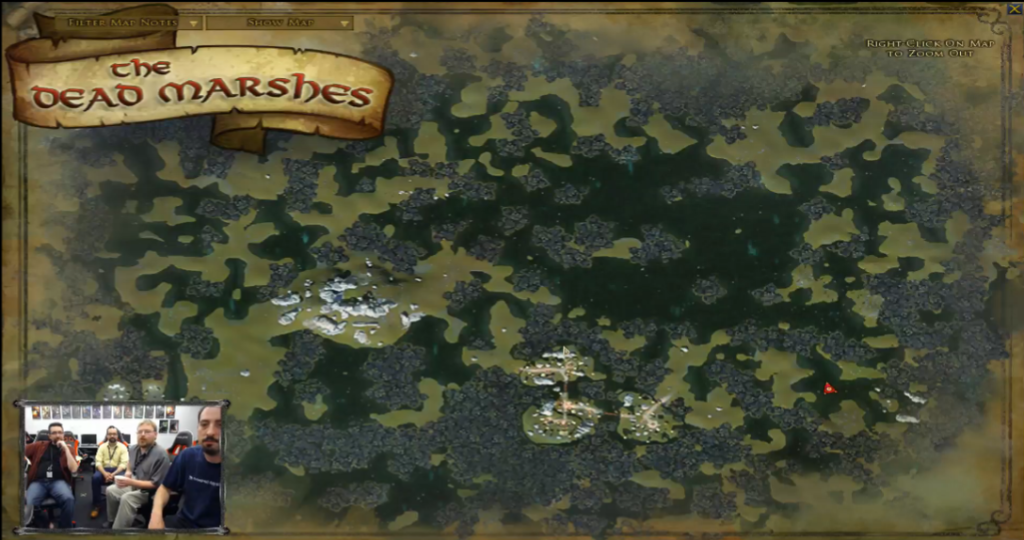 Frelorn, the community manager, led us through on his character to show us how we can go through the Dead Marshes – and to demonstrate the difficulty and risk to life – he was killed. It happens. To all of us.